The League of Women Voters of Tanana Valley is a
501(c)(3) nonprofit, tax-exempt organization. 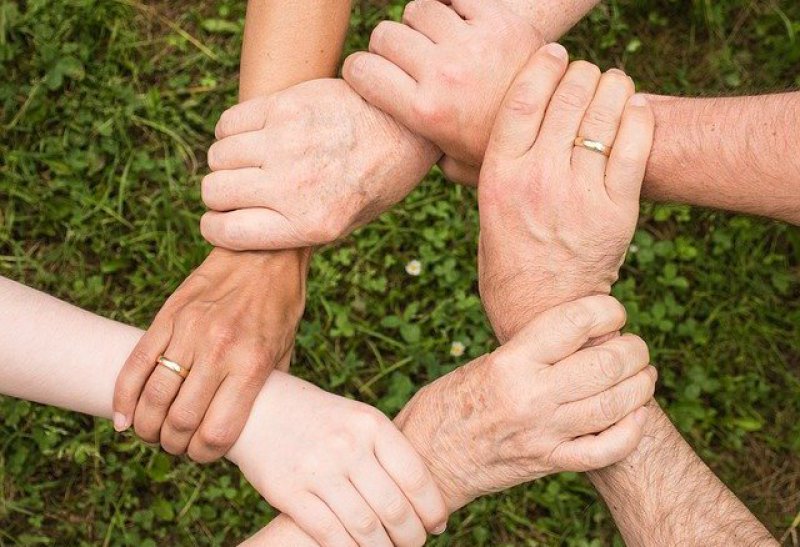 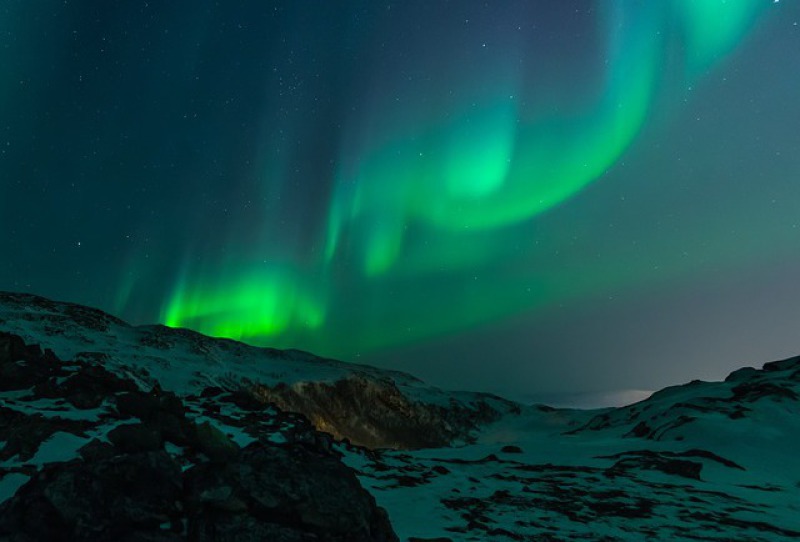 Keep Up with National League of Women Voters

Join or Renew your

Image by Andrew Becks from Pixabay 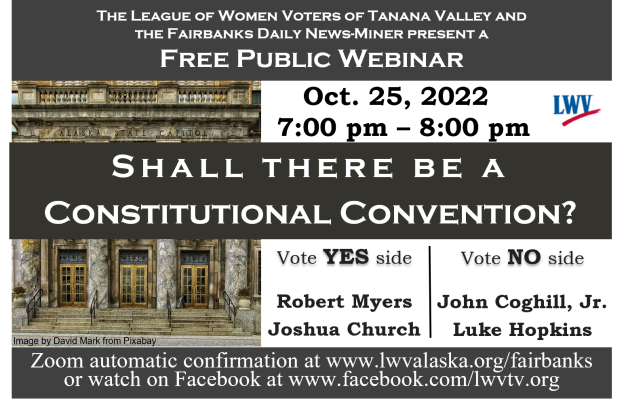 CLICK HERE to go recordings of the Candidate Forum on KUAC 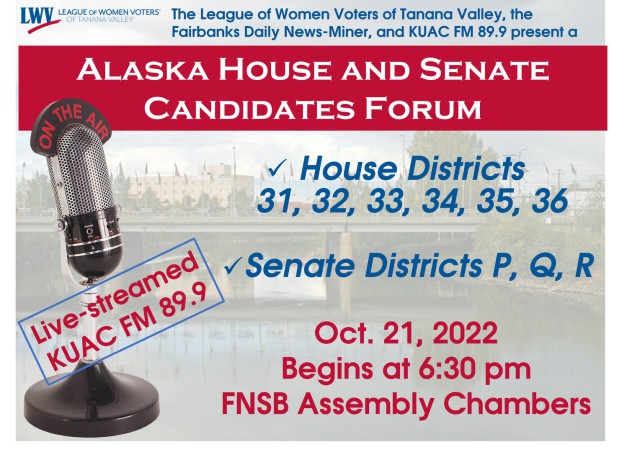 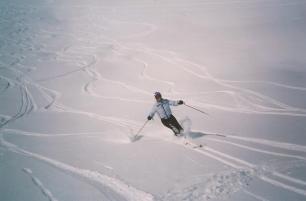 Thanks to everyone who participated in LWV's practice ranked choice voting demonstration at the Go Winter! Expo. We offered voter information and voters ranked their preferences for favorite winter activity:  dog mushing, sledding, hockey and cross country skiing.
Among kids, the clear winner was dog mushing with 2/3 of votes in the first round.  Because one option had a majority of votes (50% + 1 vote) in the first round, there was no need to further process ballots.

Among adults, there was an exact 50/50 split between the top two candidates, dog mushing and sledding.  In an actual election, Alaska law states that the winner will be selected by coin toss.  Similarly, if the ranked choice voting process were used and any round had a tie for least popular candidate, a coin toss would be used to determine which candidate continues to the next round.

The Alaska Division of Elections website, elections.alaska.gov, has many helpful resources to explain ranked choice voting if you'd like to learn more. 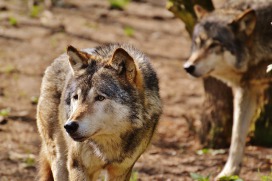 Image by Alexa from Pixabay

Members Shari George and Martha Raynolds registered students to vote at West Valley High School. There are students who will be old enough to vote in November and can register in time but miss the PFD automatic registration.  Lots of energy at the school!  It was also the same day as their School Board Candidate Forum which is available here. 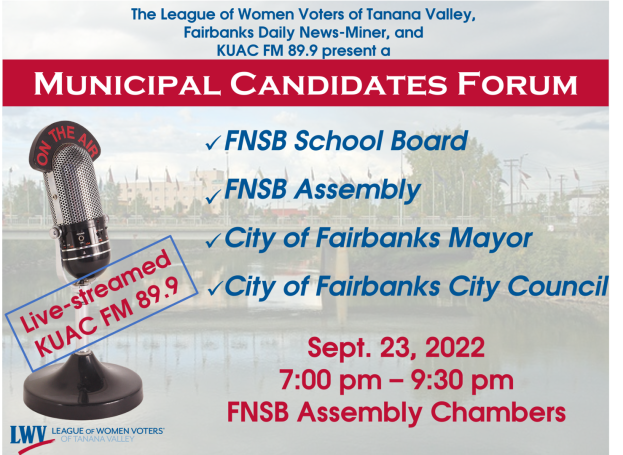 CLICK HERE to go to KUAC FM 89.9 for a recording of the Municipal Candidate Forum. 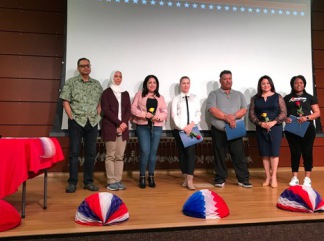 The Literacy Council hosted a wonderful New Citizen Ceremony at the Morris Thompson Building. Eleven new citizens were celebrated in the auditorium with certificates and flowers.
A few recipients told us heartwarming stories about their paths to citizenship, like the young mother who delivered twin preemies in Fairbanks but still kept her citizenship testing & interviewing appointment by driving down to Anchorage three days later.
As you may know the Fairbanks Federal Courthouse no longer hosts citizenship applications, so Interior residents now have to travel to Anchorage at least twice for fingerprinting and tests.
Another young woman gave League members more information than we dispensed to her, by explaining to us how the application process can vary from three years to 10 depending on the applicant’s circumstances. She said she chose her pathway to citizenship through enlisting in the army because she felt she “wanted to give this country something in return for everything the country gave me, and to make my mother proud”.
After the short ceremony everyone enjoyed an excellent array of delicious foods prepared by Literacy Council staff and board members.
Carol Ann Varner brought the famous League Suitcase filled with beautiful decorations as well as Voter Information and Registration applications. Sue McHenry, David Weissman and Phyllis Tugman-Alexander assisted with Voter Registration, food sampling and clean-up. 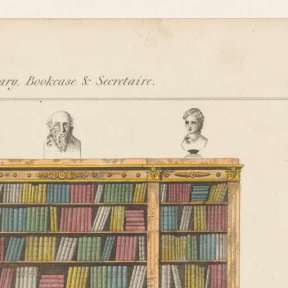 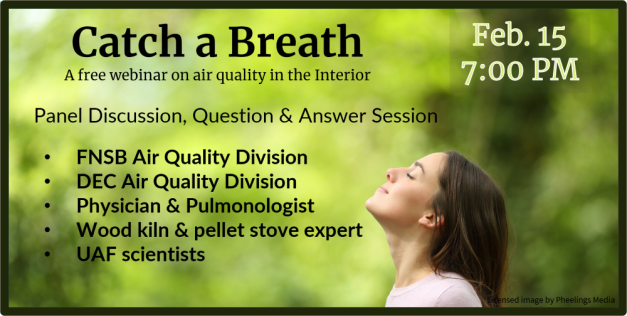 CLICK HERE TO WATCH A RECORDING OF THE WEBINAR.

Jump to info on the Freedom to Vote Act and the John R. Lewis Voting Rights Advancement Act of 2021 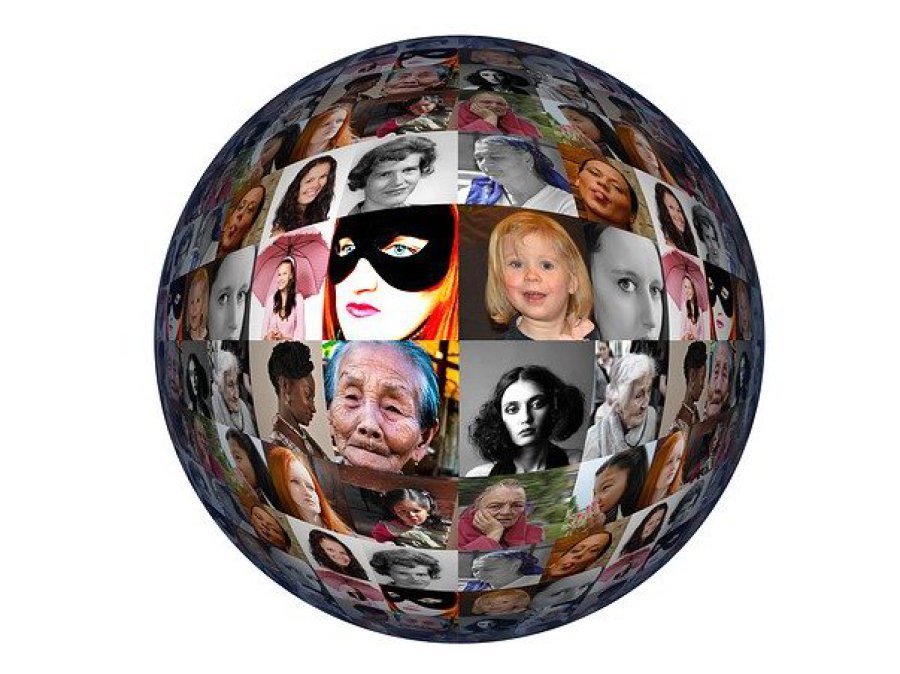 Image by Gerd Altmann from Pixabay

Equality of rights under the law shall not be denied or abridged by the United States or by any State on account of sex. --Section 1 of the Equal Rights Amendment. 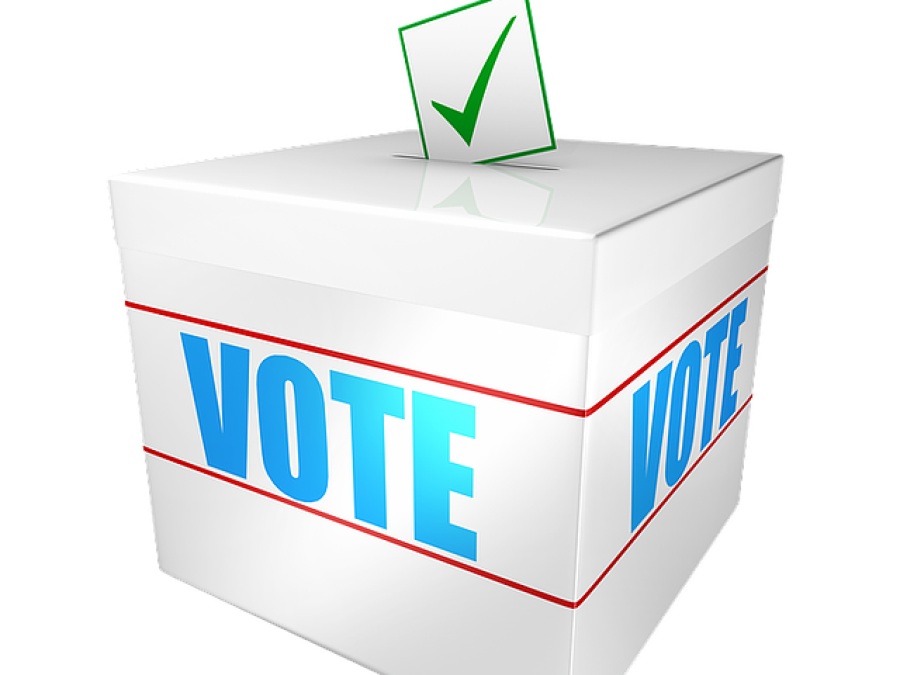 Image by Shahid Abdullah from Pixabay

The US House of Representatives passed H.R. 4, the Voting Rights Advancement Act, on December 6, 2019, by a bi-partisan vote. A full victory will come when the US Senate passes the John Lewis VRA and we can have free and fair elections that build the representative democracy America deserves.

Follow the LWVUS Blog on the John Lewis VRAA with words from LWVAK president, Judy Andree.

If these issues are important to you, write to your Senators, talk to your friends, write letters to the editors, post Facebook posts, and Tweet your support!

For the ERA (S.J.Res 6) and VRAA (S. 561), please write to Senator Lisa Murkowski and thank her for her support of these bills.  And, specifically — write, call or email  Senator Dan Sullivan to encourage him to support both of these.

To see a comprehensive list of LWVTV activities over the past several years, click the two Past Activities menu items (in the upper left menu). 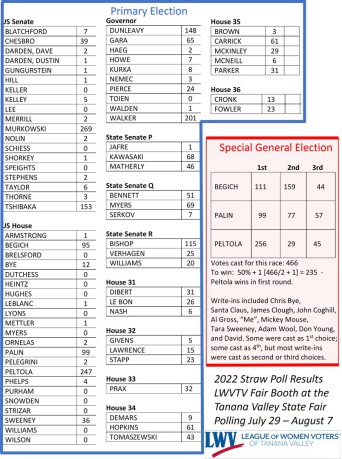 Over ten days at the Fair, LWVTV members helped voters with information on the upcoming elections, had educational information on Ranked Choice Voting, offered applications for mail-in voitng for both the Borough and the state elections, had new information for voters with disabilities, registered new voters, and changed addresses, shared Get Out the Native Vote SWAG and answered many questions. Kids Vote offered the younger set an opportunity to rank their favorite candy. We ran a straw poll using official sample ballots for the upcoming Primary and the Special General Election. (see the results at left). 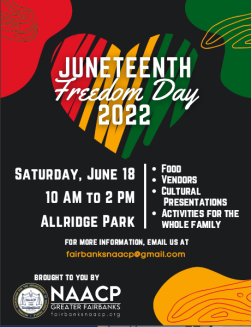 LWVTV was there with information on voting and the upcoming elections and to register voters or update voter information. Members Gayle Garrigues, Shari George, Cathy Hanks, and David Weissman enjoyed the celebration and the great weather. 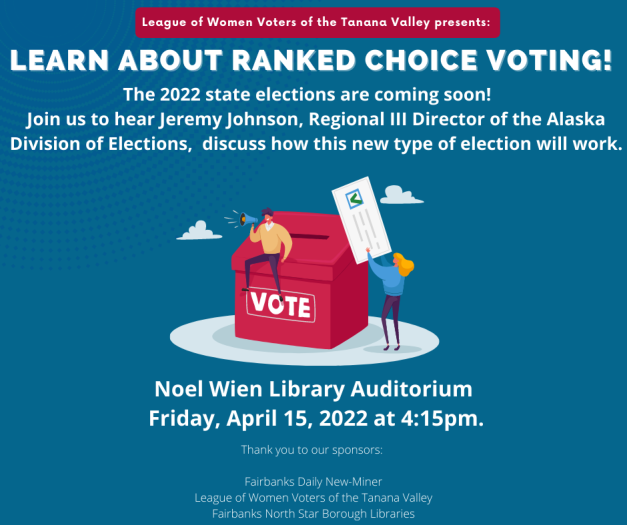 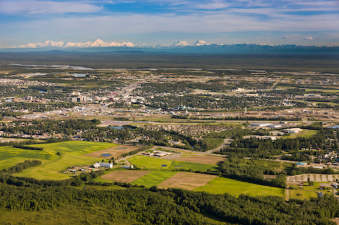 Chats with the Interior Delegation 2021

Over the course of several weeks in November and December, we held Zoom chats with most of the Interior Delegation. Beginning on November 29, we spoke with Reps. Kowasaki, LeBon, Hopkins and Prax and Sen. Myers.

Redistricting with a focus on Interior Alaska

On Oct. 12, 2021 we hosted a forum on redistricting in Alaska with a focus on the Interior and the FNSB. We had speakers from all four 3rd-party map creators. Click the blue button below to go to a recording.

Click for a Recording of the Oct. 12 forum highlighting the 3rd-party redistricting maps

Listen to a recording

Live streamed on KUAC-FM 89.9 and an inperson audience participated.

Listen to a recording 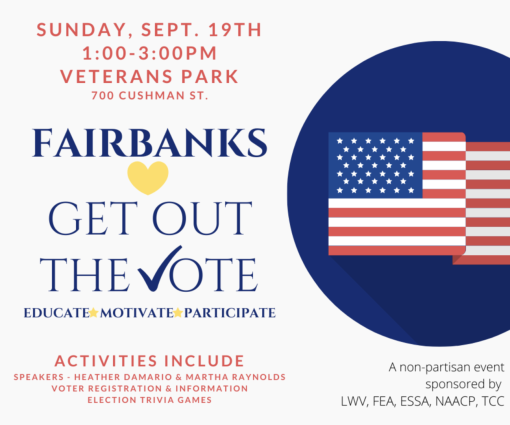 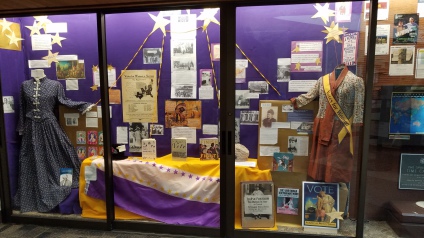 Alaska's Suffrage Stars, a LWV-sponsored exhibit from the Alaska State Museum tells the story of the first steps toward Alaska's women's right to vote and spotlights early Alaskan women's voting-rights activists. The exhibit was placed all around the library.  LWVTV mounted an exhibit at the entrance to the Library highlighting the history of voting rights activists and the Suffrage Movement in the United States. 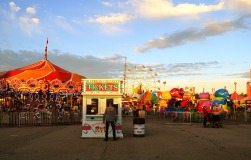 By QK from Pixabay

We practiced Ranked Choice Voting, registered citizens to vote, updated addresses, and offered voting information. Thanks to the tireless efforts of Bernardo Hernandez, Diane Lyon, and Sue Sherif we had a simplified and informative booth that was staffed by members for the entire Fair. Information and take-aways from the Division of Elections, Vote Local and Get Out the Native Vote offered encouragement and voting calendar reminders.

Our Ranked Choice Voting practice using fun Fair food as candidates was a big hit. 993 votes were cast. Ice Cream won the election for both adults and kids. Elephant Ears were a close second for adults while Cotton Candy was the kids' second choice. In both cases, there was not an outright winner (50% + 1 vote received) at the close of balloting. See the results and the tabulations just below. 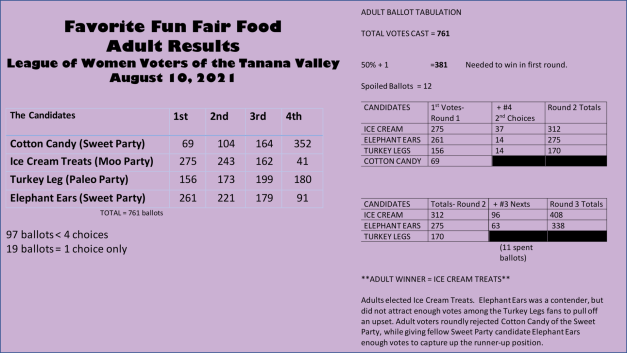 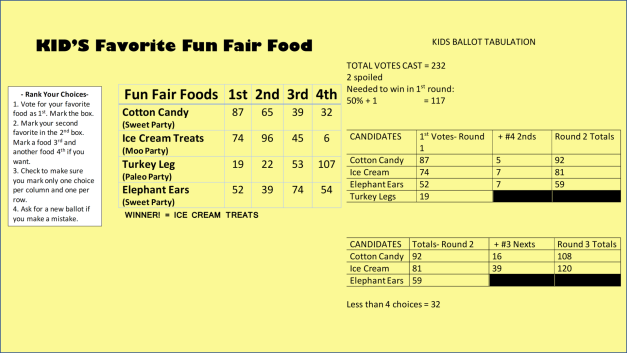 We joined other advocates in the Virtual Vendor Booths and online for an enlightening, engaging and celebratory itinerary of spirituality, history, discussion, readings, financial literacy, farm-to-table insight, healthy lifestyle ideas, poetry, our education system, voting, and a tribute to
Ms. Esther Cunningham. By David Mark from Pixabay

It was a very busy 2-1/2 hours! We heard reports from the president and treasurer, on membership and the Diversity Committee. We adopted a program for 2021 - 2022. We also amended our Bylaws and policies and we elected new officers and Board members. We were privileged to be joined by Leah Edwards, treasurer of the LWVUS, who gave us an update on LWVUS activities and influence over the past year, a reminder of the lead priorities for the national organization and what to be watching over the  coming year.

“Donald Trump must be immediately removed as President of the United States of America and banned from running for federal office ever again.

“The sitting president was the instigator of Wednesday’s domestic terrorist attack on the U.S. Capitol that left five Americans dead and many more injured. He commanded an army of insurrectionists to forcefully overturn our free and fair elections in an effort to maintain power. These are the actions of a tyrannical despot, and they are in direct opposition to American democracy. President Trump continues to present a clear threat to national security as well as the safety and security of the American public.

“For violating his oath to preserve, protect, and defend the Constitution of the United States, Donald Trump must immediately resign or be removed from office by any measure possible in accordance with the law. Removing President Trump from the office of the president and swearing in Vice President Mike Pence to fulfill the duration of this presidential term will ensure our Constitution is maintained and upheld. 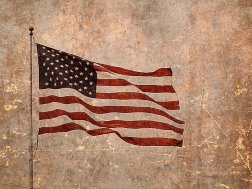 Today the League of Women Voters of the United States president Dr. Deborah Turner, CCEO Virginia Kase, and the full board of directors issued the following statement in response to the violent demonstrations at the U.S. Capitol:

“This is a dark day in the history of the United States of America. Today’s activity on Capitol Hill should have been a procedural exercise to finalize the 2020 election. Instead, our nation's Capitol was attacked by domestic terrorists seeking to invalidate the will of the people.

“The actions by these terrorists have no impact on the results of the election. This violent mob was encouraged by an outgoing president who lost re-election in a free and fair election.

“Donald Trump has emboldened and empowered violent agitators, perpetuated dangerous conspiracy theories, and dishonored the office of the President. Furthermore, the members of Congress who continuously lie to the American people about the proven legitimacy of this election are also responsible for today’s horrific events. There is blood on their hands.

“The League of Women Voters of the United States calls on President Donald Trump to concede the election immediately. We call on all members of Congress to respect the certification process, condemn the actions of these terrorists, and support a peaceful inauguration on January 20th."

Alaska Division of Elections - Information on the General Election

Jeremy Johnson from Division of Elections advised that people looking for election information should use https://www.elections.alaska.gov/ or call 451-2835 for voter information. There are now fake sites on Social Media that look really good and bona fide but they are not.

If you are a U.S. citizen and you are at least 18 years old, you can vote. In most states, before you can vote you need to register. Registration must be completed 30 days before Election Day.

Register to Vote now! Make sure you fill out the form completely; then print, sign, and mail it to the address given.