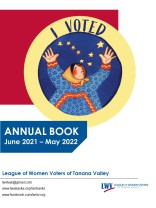 To contact officers or directors, please email LWVTV at lwvtvak@gmail.com

The League of Women Voters of the Tanana Valley is a nonpartisan organization whose purpose is to encourage active and informed citizen participation in government. We provide factual information on the structure and function of government, voting procedures and election issues.

We DO NOT support or oppose candidates or political parties, but DO take positions on issues which we have studied and discussed.

Our purpose is to promote political responsibility through informed and active participation in government.

Why Should I Join the League of Women Voters?

Because you care about the future of America. You recognize that along with your rights as a citizen comes the responsibility to participate fully in the democratic process. As a member of the League of Women Voters you can:

What does the League of Women Voters of the Tanana Valley (LWVTV) do? 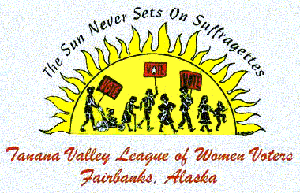 The LWVTV has operated a pre-election poll at the Tanana Valley Fair for many years, as well as moderating numerous state and local candidate debates.

The LWVTV has conducted extensive studies and public information meetings which are used to create consensus positions on local government issues.

How is a League position developed?

The League's program consists of those governmental issues that the League has chosen for concerted study and action at the national, state or local level. The program process is specified in the bylaws and includes the following steps:

Bylaws of the LWV of the Tanana Valley

Click Here for the bylaws and position papers of the state and national League of Women Voters.

History of the Fairbanks League

1964 The provisional League of Women Voters of the Fairbanks North Star Borough was organized in November, 1964 with Mary Jean Pe'we' as president.

1965 On November 29, 1965, the League was recognized by the National League Board as a full-fledged Local League. Mary Slotnick became president in September 1965.

1966 Prior to recognition as a local League, a study of the local government is required. The culmination of that study was publication of the pamphlet, Know Your Borough, in 1966. The first program adopted by the members was a study of the relationship between the newly formed North Star Borough and the two home rule cities, Fairbanks and North Pole.

1967 Our next publication, Fairbanks, Golden Heart City, followed the study of the City of Fairbanks. Emphasis was on the economic problems of the city and the citizen. During 1967, members voted to support the assumption of Hospital Power by the Borough.

Under the National Human Resources Position, a local study resulted in publication of The Alaska Native in Fairbanks.

1971 Locally, members probed The North Star Borough School System's Ability to Meet Changing Educational Concepts. In 1971, another school study was selected, A Study of the Regulations and Policies of the School Board as They Relate to the Needs of Youth in the Community.

1972 Our League received an Alaskan Humanities Grant in 1972 to conduct an assessment of citizen awareness concerning land use in the community. A film, "Our Community Speak," was prepared as part of this project. We updated the Your Local Government pamphlet. Action included support of the City Center Plan; an Anti-idling Campaign, during which members placed cards on the windshields of cars that were left with engines running while the cars were vacant. We presented a weekly radio show interviewing local experts about current issues.

1973 The 1973 local program included a study of the proposed unification charter, helping citizens to understand the issues involved. The publication, Juveniles in Need, was written by the local committee.

1974 The Alaska Native Land Claims Settlement Act was a major concern of Alaskans and the State League, with financial assistance from the LWVUS Education Fund, presented workshops throughout the state to address land use issues.

1977-78 At the 1977 Annual Meeting, members voted to Look at Borough Government. This included examination of the state statutes which describe borough structure, planning and zoning, and unification, in an effort to make local government more responsive to the citizen.

A Conflict of Interest position was adopted in 1978.

1979-81 The League emphasis during 1979-81 was on the functions of Borough and City Departments and their effectiveness. We also conducted a school-needs assessment/community survey. An ordinance requiring advertisement of vacancies was introduced in the Borough Assembly at the request of League and was adopted. An update of the booklet Your Borough Government was completed.

The League adopted a new name in 1981: Tanana Valley League of Women Voters and a local League office was established.

1982 Education issues in 1982 included the Health Curriculum, Aims and Objectives of the Secondary Counseling, and review of the existing Policies and Regulations of the Board of Education position. The local government emphasis was on single -member vs. at-large representation for the Borough Assembly. We co-sponsored a Town Meeting of local citizens to identify community concerns. Members facilitated area land-use workshops under a Borough contract.

1983 Members chose to conduct a survey of Secondary School Counseling under the Education position and reached consensus on Borough Assembly representation.

1985-86 The local study for 1985-86 was on Borough Services. The 1986 consensus found that citizens are satisfied with the Service area concept and that the system meets their needs at that time.

TVLWV and the Chamber of Commerce co-sponsored a debate by the candidates for U.S. Congress.

1987-88 As part of our Voting Rights action we promoted a bill providing for readable ballot propositions and supported local legislators in their efforts to get the bill passed, which it did in the Spring of 1988.

1988-89 League members served as facilitators and conducted workshops for various organizations and government entities. We lobbied the State Interior Delegation on open meetings, our campaign finance position, and increased funding for APOC.

1990-91 The League was contracted to observe and consult for the Laborer's Union triennial election.

In the Spring of 1991, TVLWV arrived at consensus on Preparing High School Graduates for the World of Work after a two-year study.

1991-92 The Voter Service Committee kept track of a move toward closed primaries and changes in election districts resulting from reapportionment. The Waste Reduction Committee investigated local efforts at recycling.

The Tanana Valley League hosted the state convention on April 24 and 25 at Pioneer Hall in Alaskaland.

1992-93 The League conducted two candidate forums for state and statewide candidates at the Fair and held a local candidate festival. We worked with the state League to successfully oppose the call for a constitutional convention.

A new study item was adopted, Public Safety - What are the Public's Choices and Needs?, to study police, fire and ambulance services.

1993-94 We held two public meetings on our public safety study at which information was presented by local officials and members of fire, police, and ambulance departments.

A workshop was presented on How to Facilitating Meeting for LWV members and the public. Members trained at this meeting helped facilitate a Health Care Reform meeting with the Alaska Nurses Association, the American Association of Retired Persons and TVLWV.

1994-95 The League ran a Straw Poll of the candidates on the Primary Election Ballot, and held a State Candidates Forum to inform the public on their positions.

An informational meeting was conducted on How Borough Government Works with representatives of the Fairbanks North Star Borough and members of the Borough administration.

A North Pole Borough Committee was formed to study a proposal to for a new North Pole Borough. Members attended the informational meetings borough-wide to be sure the public was asking the appropriate questions and getting fair and complete answers. Members also attended a meeting with Dan Bockhorst of the Committee on Community and Regional Affairs concerning how the state government evaluates proposals for new borough governments. In June a letter was drafted to the Local Boundary Commission raising questions and concerns regarding removal of a large portion of the current borough to form a new borough.

If you are a U.S. citizen and you are at least 18 years old, you can vote. In most states, before you can vote you need to register. Registration must be completed 30 days before Election Day.

Register to Vote now! Make sure you fill out the form completely; then print, sign, and mail it to the address given.